Most of you know what stock photography is, but you may not know that both I and my friend and fellow blogger, Rebecca Givens, sometimes dabble in it. Ok, well, I dabble and she just happens to be the most famous stock photography model pretty much ever.

Previously super secretive about her identity, I can now proudly say that, after much coaxing, Rebecca allowed me to conduct and publish her first interview ever.

When I first requested to interview you, you declined… but you changed your opinion. How come?

Rebecca: Years ago I was approached by a couple of journalists over social media and asked to do an interview. I declined, but they convinced me to tell them a little about myself, like what my ancestry is. I told them that my name is Ariane (which is actually my middle name), because I wanted to remain anonymous for two reasons: I didn’t know how they would portray me, and part of the original conditions of posing as a stock model is that I had to remain relatively anonymous for a certain number of years.

As it turns out, I wasn’t super happy with the way I was portrayed, and I got dubbed “The Overexposed Model”, which can’t have helped my photo sales. That said, I guess the cat is out of the bag now. I’m a bit nervous about the idea of letting people know who I am, but I started a health blog recently (www.RadiantPeach.com), so I guess people will find out who I am either way, eventually.

Isn’t it better for a stock model to stay anonymous?


That’s good. When did you think: I want to become a stock model?

Rebecca: I never thought I’d become a model. I met a photographer who was shooting stock, and he asked if he could shoot me, so I said yes. Once money started coming in, I realized that it’s a relatively easy way to supplement my income. We do a lot of shooting while I’m doing my normal routine – things I’d be doing anyway.

So you usually don’t think about the perfect stock model pose or a perfect smile?

Rebecca: Not really. I basically try to act natural, because those are the shots I think sell well.

Why do you think that your photos are so popular?

Rebecca: I think I’m popular because I have a friendly, non intimidating, approachable and racially-ambiguous look. I’m the perfect model for any company that wants to appeal to all races.

Is it your full time job?

Rebecca: Sometimes it feels like a full-time job. I work with my boyfriend, David, and my brother sometimes. I convinced them to get in on it too. I never miss a chance to model, and since I’m with them a lot, I’m being photographed when I do mostly everything, it feels like. Some days I think I’m on a photographic reality show. Besides modeling I write for my blog Radiant Peach, writing articles about health and beauty for Urbanette Magazine, and consulting as a health coach, when I have time. It keeps me very busy.

I can imagine. Being so productive, do you ever see yourself in an advertisement?

Rebecca: A lot, actually! I think it’s really fun seeing myself in magazines and ads. I was in Times Square yesterday and I saw myself on a giant screen, then I was flipping through Natural Health magazine and saw myself in an ad for a wellness retreat. I love it!

Do you ever think: I hope they don’t use my photos for a weird advertisement?

Rebecca: I actually hope that someone uses it in a tampon ad someday, haha. No, I’m joking actually, until now I wasn’t too concerned because nobody knew who I was. The only downside of representing an unflattering brand is that it may dissuade other companies from using me as their model.

Are there any other downsides of being one of the most successful stock models of the world?

Rebecca: Yes, I recently had to change my phone number because I have a stalker. I also webcammed with a person for an article and they took a screengrab and posted it online. A month later I had to send legal letters to three people who were pretending to be me. I think that opened my eyes to just how much of a pain this fame thing could potentially be.

Why do you think so many people are obsessed with you?

Rebecca: I think since there are so many images of me out there, that it makes certain people feel like they know me. Especially before they figure out who I am, because then they can put their own wish-list on my image. I become their fantasy.

Thanks for the insight, Rebecca!

Summer Pedis! What Colors to Wear Where 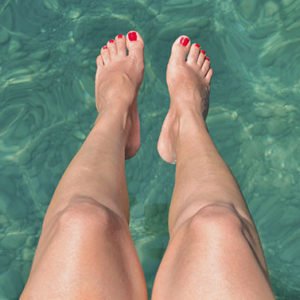 Summer Pedis! What Colors to Wear Where

I think that one of the coolest things about being a model is that we don't really get to think about "what's in" for every season....