Toxic Shock Syndrome: How the disease changed a model’s life

Lauren Wasser, an  L.A. model, lost her leg because of Toxic Shock Syndrome.

Who is Lauren Wasser?

Lauren, now a 24-year-old L.A. model, was on the brink of her career three years ago. She was on the rise, appeared on Italian Vogue with her mother and dropped off a potential basketball career for modeling.

She was leading a great life that most models only dream of. A part of the socialite scene and an own apartment in Santa Monica, she had it all. And she lost all of these, and more, when she got sick and found out she had Toxic Shock Syndrome.

What is Toxic Shock Syndrome?

The first thing that probably comes into your mind when you hear Toxic Shock Syndrome, or TSS, is a tampon. Sure, you’ve seen TSS on tampon labels, saying that there is a 1 of 100,000 chance that you would get the disease. And since the odds are so low you’ve probably ignored the warning.

Because the tampons are kept in place for a long time, the environment that it creates in the vaginal canal is very optimum to for bacteria to live in. This is when TSS sets in. It happens really fast and could be fatal if not treated right away.

Watch this video to learn more about the symptoms of TSS:

The bacterial infection was so severe that Lauren Wasser’s leg was cut off. This is prompting her to sue Kotex Tampons.

Aside from pursuing her modeling career with one leg, Lauren Wasser is in the middle of a lawsuit against the makers of Kotex tampons, which is what she was using when she had TSS.

Aside from this, she is also supporting the new bill that would start research about the real dangers of tampons and feminine hygiene products.

It is not very often that we find models like Lauren Wasser who speaks out and spreads the word of their demise. And even though Lauren has lost something that is deemed important to any career worth pursuing, she didn’t let this stop her. She came out, told every one her story and now she is continuing where she left off, three years ago.

Is it easy? She says there were times when she wanted to end her life. But seeing where she is now should serve as an inspiration to every one.

Tips on how to avoid TSS

Don’t use the same tampon for more than four hours. Change as often as possible.

Handle tampons with clean hands to stop the spread of bacteria. 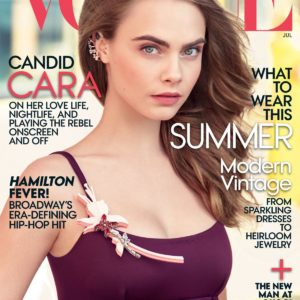 This Vogue cover looks familiar? If you haven't seen it yet, well that's because it hasn't been released on stands until...