Take a trip with Liu Wen to Beijing!

All the way from  a small province in China is supermodel Liu Wen. She is Estee Lauder’s new face though you’ve definitely seen her sporting something from H&M, Dolce & Gabbana, Roberto Cavalli, Alexander Wang and many more others. Liu Wen is also one of the most sought after models for a runway show, having a record of 53 shows for the fall-winter 2012 season.

First Asia, and then the world

One of the perks of being a supermodel like Liu Wen is having onsite photo shoots all around the world. Though she is based in New York, she finds time to travel back and forth in her country.

What are Liu Wen’s tips when traveling to Beijing?

She says an insect repellant is a must. When traveling to any Asian country, lathering on a bug spray is essential as tropical countries are a haven for insects. She also says that you need to be hydrated and get adequate sleep in transit. A bilingual tour guide is also a must – you can even hire her if you want.

Liu Wen also emphasizes that you’ve to go to Beijing on an empty stomach as the city offers a feast!

Where to eat and drink in Beijing?

Liu Wen suggests you eat in Ding Tai Feng as it is famously known worldwide, and if you want to try the most amazing Peking duck, you have to eat at Grand Hyatt’s Chang An Yi Hao.

For the best waffles, you should check out Maan Cafe, and she also loves the futuristic interior of Cafe Copy inside the Today Art Museum.

If you would like to experience the drinking culture in Beijing though Liu Wen doesn’t drink, she suggests you visit Xiu Bar at the Park Hyatt or the ones at Hou Hai.

What to do in Beijing?

Aside from shopping in the are of San Li Tun Village where there are shops, bars, and tea places, you can also check out the Xin Hua Bookstore, which is the national bookstore of Beijing.

She also suggests visiting the parks in the morning as there are numerous people doing tai chi and you are free to join them. If you’re artsy and would like to check out Beijing’s creative spaces, you can visit the 798 Art District.

And your trip to China won’t be complete without seeing the Great Wall or at least a part of it!

Where to stay in Beijing?

Liu Wen says that the Ritz Carlton, though five stars, has a really homey feeling, but if you want to experience traditional Chinese courtyard-style you should stay in the Duge Courtyard. She also recommends the Aman Resort for great views.

Liu Wen is very down to earth and she knows that she wouldn’t have gotten far without looking back. Watch this video and see how Liu Wen adjusted to living in New York:

Would you like Liu Wen to be your tour guide when you visit Beijing? I sure wouldn’t mind!

A Secret Your Favorite Bloggers Don't Want You to Know 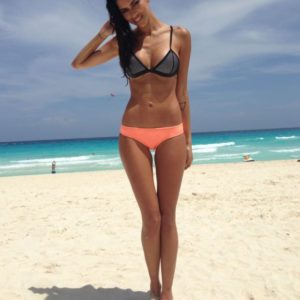 Meet Juliana Herz, our model of the week on Instagram. This Costa Rican beauty is managed by Elite Model Management and is definitely...