More reasons to celebrate the LGBT pride in our country as we welcome Hari Nef to the modeling industry!

Who is Hari Nef?

Just recently, Hari Nef, 22, was signed by IMG Worldwide as their first trans gender model. She joins the ranks of Gisele Bundchen and Gigi Hadid under the same prestigious modeling agency.

And what’s the first thing she’s looking forward to? Having yogurt with Caitlyn Jenner, of course.

“I’m trying to get frozen yogurt with Caitlyn and just talk about girl stuff,” she says.

What’s next for Hari?

After she finished her studies in Columbia, she got called in right away to fly to Stockholm and do some shoot. But this isn’t her first time to work an actual shoot. She has already walked the runway for Hood by Air, Eckhaus Latta, and Adam Selman.

Her being signed in by IMG Worldwide puts her on a more visible front, as she puts it. She’s about to do a high profile project when she arrives in L.A. for the first time.

On being a “woman”

“Being a woman is an option, being trans is an option, and they’re options that appeal to me,” she says. “We need to listen to people, not labels, not semantics.”

Though trans models are nothing new in the industry, they’re still looked upon by many as role models, being applauded for bravery. Hari is not new to this, she receives messages on her Tumblr from people around the world.

“It’s so lonely being the only person in my town who is trans. I am so thankful that I follow you and other girls on this site . . . maybe I’m living vicariously through you a bit. You’re so brave.”

More than just a model

Hari isn’t just your average trans model, she’s also an actress. Here’s an example of a performance that she did, which you can also find on her Youtube page: 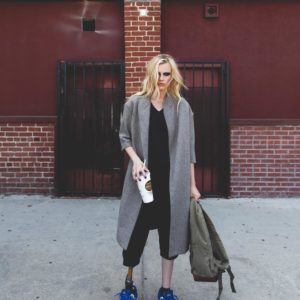 Lauren Wasser, an  L.A. model, lost her leg because of Toxic Shock Syndrome.   Who is Lauren Wasser? Lauren,...