As a model myself, I am of course one of Fashion Week’s biggest fans. This is why I decided to talk about one of the biggest revelations of this year’s edition. The name is Carrie Hammer; what she did is by far one of the most remarkable acts in the history of Fashion Week, and she is definitely my new idol in the world of fashion.

The designer, who declares that in her shows she prefers to use “Role Models, not Fashion Models”, has changed Fashion Week forever making the quadruple amputee Karen Crespo rock the catwalk on September 5. Carrie Hammer had already surprised the world earlier this year when she featured the first model in a wheelchair Dr. Danielle Sheypuk in February, and this last show just made the message clearer.

Karen Crespo, who lost her limbs due to bacterial meningitis, reached out to Hammer  after seeing Sheypuk fiercely going down the catwalk. Thanks to the designer, she was able to realize her dream to become both a model and a role model for others in her condition. Furthermore, Hammer made sure that Crespo received brand new prosthetic limbs after hers were stolen from her porch.

Carrie Hammer’s intention is to sponsor all abilities, and open the world of fashion to every woman like never before. What she does is selecting role models for her shows, for the whole world to see. Beauty is also in being different, and it’s something we should never forget.

“My line makes dresses to fit women. We don’t make dresses that women need to fit into.”, said Hammer to Huffington Post.

Hammer is not the first to try and fight the system from the inside. I already wrote about plus size models, but, even if these are first baby steps, there is still so much to be done, especially in Fashion Week. Many talk of the difference in numbers between white models and models of colors. Even if more and more diversities are being featured on the show every edition, the difference is still too big to call it a change.

Furthermore, the lack of diversities in sizes and other, excluded Hammer’s example, are so obvious that it is almost superfluous to highlight it. Some designer decided to launch some lines for plus size and teens, but the fact that these are still special lines is an obstacle that needs to be overcame. Yes, the industry has its rules, but isn’t it time for them to become more flexible?

My opinion as a model is that fashion should be for every age, size and color, and that every woman has the right to feel beautiful. What do you guys think? Let me know in the comments!

Nervous For The First Shoot? Here's How To Deal 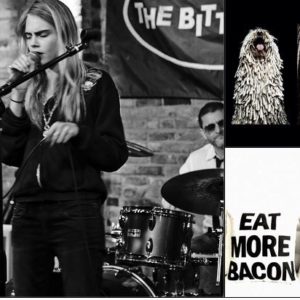 I have to say, I love Instagram. I think it' a great way to have access to intimate and fun moments of people we love and,...