As last year’s Victoria’s Secret Fashion Show closed its curtains, Adriana Lima revealed that walking down the runway as an Angel takes hefty preparation. For five months prior to the show, she went on a strict diet and ramped up her intense workouts with a trainer to seven days a week, and then for the full two months before the show, she did her trainer-assisted workouts twice a day. On top of that, for nine days prior to the show, Lima lived on a protein-shake-only diet. For twelve hours prior to the show, she ate and drank nothing. “No liquids at all, so you dry out. Sometimes you can lose up to eight pounds just from that,” she said.

7 out of 10 girls in grades 5-12 said they get their idea of a “perfect body” from models in magazines. The modeling industry has encountered death after death. Brazilian model Ana Carolina Reston passed away in Sao Paolo after battling anorexia and bulimia. She weighed only 88 pounds then. Uruguayan Luisel Ramos died during a fashion show in Montevideo, Uruguay. She was anorexic and weighed 97 pounds. Reston and Ramos are only two of several models who met death because of eating disorders. They are only two of the many women around the world who have starved themselves due to distorted standards of beauty. “Models are under increasing pressure to be thinner and thinner, and younger and younger.”

Women’s magazines provide the definition of beauty, ultimately influencing young girls’ self-esteem. In fact, the National Association of Anorexia Nervosa and Associated Disorder stated that 7 out of 10 girls in grades 5-12 said they get their idea of a “perfect body” from magazines. While self-esteem and perfectionism are only two of the many factors causing eating disorders, these are highly cultural factors that are shaped by key influencers of society. The Council of Fashion Designers of America (CFDA), led by influential designer Diane von Furstenberg, addressed this issue when they wrote a letter to the fashion community on the issue of unhealthy fashion models. Released prior to the opening of New York Fashion Week, the letter articulates the gravity of the situation and provides concrete guidelines to help alleviate the problem. Some of these are providing healthy snacks backstage during shoots and shows, providing health education, and implementing an age limit for runway shows. In their letter, Diane von Furstenberg admitted that the demands of the fashion industry influence fashion models’ self-esteem. It stated: “Designers generally produce only one sample size for the runway, and in the last decade there has been a dramatic downward shift in the sample size of some of the top design houses. As a result, models are under increasing pressure to be thinner and thinner, and younger and younger.”

While this letter is a start in addressing the problem, there is a long, long way to go for the fashion industry. After all, runway modeling is just one aspect of modeling. There are also the magazine shoots, advertisements, and catalogues. These involve not only designers but also corporate executives, advertising agencies, and magazine editors. In the big intertwined web of influence within the fashion sphere, how can the size 0 situation really be solved?

The Darkest Diets of Modeling

The problem is that Victoria’s Secret Angels have really high standards as models. I mean, when you say VS Angels, they must be really sexy, right?

It’s really sad that these young girls are already going through stress and pressures like this. When I was in that grade I didn’t care about how I look or what others think about me.

I think that it might be better to not let kids model at all. It might save them from thinking this way or just avoiding the fact that the modeling industry has issues like this.

Yeah, I also agree. Children aren’t as strong mentally and they could easily get affected with this.

Even if you don’t let kids model, they still see the “perfect” looking models in magazines and advertisements. They still feel like they have to keep up with the standards. The pressure is everywhere.

Isn’t it that the fashion designers should be the one to adjust with circumstances like this? ?

This is a big problem that can’t be solved easily. It’s something that needs a lot of work and it will take so many years to fix it.

No one is asking these young girls to be perfect. Oh my, this is very sad and alarming. They should be enjoying their youth at this point in their lives. Not trying to be perfect. Personally, I think perfection doesn’t really exist.

I also think that perfection does not exist. It’s only a matter of feeling content about ourselves.

Why can’t these designer brands just adjust the sizes? All they need is a mannequin that’s normal in size and that’s it. I know, that will probably discriminate the normally slim ones, but we have to encourage them to have normal weight and have normal eating habits. Having small mannequins isn’t helping at all.

I agree. It will encourage teens to be normal in weight.

At a young age it really could take a toll on their physical and mental health easily. They’re very vulnerable at this age.

We should help these young girls. More letters should be done in order to get the attention of these designers.

Women’s magazines are really bad for us to read. They promote shit like losing 2 sizes when that’s completely impossible.?

The modeling industry is big and it’s comprised of other industries that work together in order to create concepts or standards. Models need to conform to these standards, otherwise they would not bloom in their careers. These models are only desperate to earn and to be known in the modeling industry. They’re only working hard in order to make a name for themselves and yet in return they’re mocked for their sizes if it’s not 0.

True. Everyone is affected by this and not just models.

All of you, you’re beautiful. Please don’t let standards like this get in the way of how you see yourself. ?

Women’s Health magazine should be about how women can love their bodies, not to starve them or workout to death.

I’m so disgusted about how women are treated in terms of their bodies. As long as someone is healthy, let’s stop it with the sizes.?

The question as to why is thin attractive today. It’s because in today’s world of ever indulgence with food thin is an anomaly and is far more difficult to attain.

God, I wish I had the willpower to get stick thin like that. Feels like I’ve been chasing that ideal since I was 10.

Everyone hates how thin models are but everyone wants to be like them it’s so crazy.

The problem isn’t skinny people, the problem is that the people in charge allow anorexic girls to work, encourage it, and don’t accept a range of healthy sizes. There needs to be a range of bodies, not a certain type of body banned.

What we’re looking for is a beauty with a twist. A walking stick. I don’t think modeling is healthy. There have been many male and female models who starved themselves and then dropped dead. They developed eating disorders and then they show off their perfect bodies for other people to see and that gets other people involved in that sick world.

I don’t get why it’s required for them to be so freaking skinny? That level of skinniness isn’t even attractive, why is it the ideal body image.

They get so skinny that the only people that can wear the clothes they model are themselves. So what is the point?

Why do all models have to look the same? Why can’t some be short and some be tall and some be curvy (or plus size, as society says) and some be tiny? Like that would be cool.

This is probably telling girls that if their stomachs are not so tiny if their legs are not so long that they are too ugly to live their passion. Everyone is beautiful, just accept actual real people.

This is a cruel and ruthless business I believe in people being healthy but this is ridiculous! These girls are already thin, I can only imagine the damage that is being done to them psychologically.

I agree that training this way and working your body so hard can be dangerous, but it’s not possible to achieve that lifestyle in a healthy way.

It is pretty depressing to see women with like 3% body fat.

So are you saying that these victoria’s secret models or angles heavenly bodies are all about “overtraining and undereating”?

I respect all the models after knowing all the hard training they need to go through. I would be in the hospital in a coma.

I’ll never understand why any women would want to put themselves through all that shit for 1 show of walking down a tiny little runway, jut to pose at a camera. It’s ridiculous.

How do runway models skip eating before the show? I feel dizzy if I skip breakfast.

Jesus, a liquid diet for that long isn’t healthy. You realize by doing that you’re shutting down your bowels digestive process for that nine days? As a person who has gone through an eating disorder, I have had some crazy experience from things similar to this.

The models are 100% not supposed to represent the people who buy the product. They’re basically supposed to act as flawless, sexy, clothes hangers. They’re supposed to look incredibly gorgeous and unattainable so that we as women want to buy products because we think it will give us some of that sexiness, and men will want to buy the product for us, so that we will look like that for them. I heard once in a documentary that designers basically pick models that will show the clothes without distorting them too much with their bodies, so yeah they’re basically sexy clothes hangers, not a representative of their customer base.

Even my 8 year old was complaining about her fat arms and would not wear sleeveles clothes. I don’t think her arms are flabby at all but she seems to think that’s the case. I asked her why she feels this way and she said it was because she sees it on TV that pretty girls are always thin.

We have to stop this immediately. Young women would only get worse through the years because of this beauty standard that we have.

Age limits won’t do much with regards of the letter they sent. Sure, it will just limit those who aren’t in the right age to work or be models, but since they’re aiming to be like their top model idols, they will be starving themselves in order to be size 0 by the time they reach the right age. 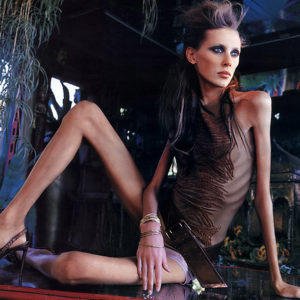 The Darkest Diets of Modeling

Models may seem beautiful on the catwalk, but behind the scenes, they are going to drastic measures to achieve their look. A...