Ages ago, I used to keep a list of funny quotes I came across. They’re mostly about beauty and self-image, and I think they’re good for getting perspective. I mean, if a supermodels hate their butts, then maybe mine isn’t so bad!

These are some of my favorites:

“In the studio, I do try to have a thought in my head, so that it’s not like a blank stare.”

“They were doing a full back shot of me in a swimsuit and I thought, Oh my God, I have to be so brave. See, every woman hates herself from behind.”

“I can do anything you want me to do so long as I don’t have to speak.”

Talking about the top supermodels of the 1990s: “We’re like old shoes now. Yes, you buy new ones. New ones are fabulous. You wear the new ones. But every once in a while you put on the old ones. Because they’re comfy. And they fit. And they make you happy. And I think that’s what happens in our business. They bring us back.”

“Haven’t you heard that the waif look is out?”

“I don’t mind nudity as long as it’s artistic.”

“My mom says to me, ‘If I see another picture of you with a Marlboro in your hand, I’m gonna kill you.'”

“It was kind of boring for me to have to eat. I would know that I had to, and I would.”

“My worst moment was when my skirt fell down to my ankles – but I had on thick tights underneath.”

“When I model I pretty much blank. You can’t think too much or it doesn’t work.”

“You can usually tell when I’m happy by the fact that I’ve put on weight.”

“I think, if my butts not too big for them to be photographing it, then it shouldn’t be too big for me.”

“I always hated my mole growing up. I even thought about having it removed. At the time I didn’t do it because I thought it would hurt, and now I’m glad I didn’t.”

“I would rather exercise than read a newspaper.”

“My husband was just OK looking. I was in labor and I said to him, ‘What if she’s ugly? You’re ugly.'”

“Everyone should have enough money to get plastic surgery.”

“Because my hands are rough and wrinkley, they are my least favourite feature. An ex-boyfriend used to call them ‘Freddy Kreuger’ fingers.”

“I don’t know what to do with my arms. It just makes me feel weird and I feel like people are looking at me and that makes me nervous.”

“I love the confidence that makeup gives me.”

Celebrities Photoshopped: Before & After Comparisons

Coco Rocha on the Realities of Modeling 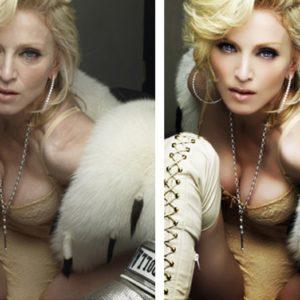 Celebrities Photoshopped: Before & After Comparisons

Have you ever noticed that if you were feeling great about yourself, all you need to do is check out a copy of Vogue and you're...