Ashley Graham and #NYFW: what the model said on TED

Not your average models on the #NYFW runway

This New York Fashion Week is all about diversity, as models that are being called “plus sized” rocked the runway. And it’s not just Project Runway’s or Marc Jacobs’s show that featured them, Ashley Graham’s lingerie show garnered the most attention.

But why not? Let’s admit it. Not all clothes being shown during runway shows or fashion weeks can fit the average women. In fact, the average American woman is a size 14. And according to the fashion industry, the “plus sized” clothing starts from a size 8 to 16.

So what I am trying to say is that, there is basically nothing on fashion shows that can fit majority of the women who will be buying it. Well, not until the clothes reach the stores anyway.

It’s only fair then that, since the fashion industry is actually catering to the American women and possibly every woman in the world who buys clothes, models who aren’t a size 0 be on the runway. And this is what happened this #NYFW.

Ashley Graham speaks out on TED

Ashley Graham isn’t the only model being categorized as plus size, I’ve talked about Stefania before, and her advocacy for being called a MODEL instead of plus size model.

Here is Ashley Graham’s inspiring talk on TED. May all of you be inspired as I did.

Karlie Kloss and the lipstick challenge 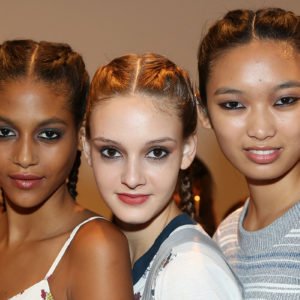 New York Fashion Week is not all about the designers and the models walking down the runway. It's also about the celebrities...