You should think more than a millions times before getting a tattoo. Which part of your body you’ll want it, which design, how big or small it will be, would it be colored or just simply plain yet bold? Some people want their whole skin to have all kinds of tats while others just want a one small yet meaningful icon on their body.

Having yourself inked can be one of the major decisions in your life. But here are 10 Victoria’s Secret sweeties that have their tattoos and lovin’ it, that could help you in this decision making! (And could convince you to get one, at least)

She has this sexy body even though she already has 2 kids! And that ankle tattoo makes her even more beautiful!

That lower back tattoo is also what that swimsuit is for!

Being a stunning model, Anja Rubik also had her ink near her pulse in her left arm.

This VS Angel has a named tattoo on her wrist that is her mother’s name (Tiffany) and sister (Aurelia) on the wrist with her handwriting.

Can You Be a Model If You're Missing a Limb? YES! Meet Alex Minsky

What's Inside a Model's Bag?

I’m too scared to get a tattoo because I hate needles. Their tattoos look very pretty and simple though.

Behati’s tattoo is what I’ve always wanted. A quote of some sort in cursive.?

If I’m going to get a tattoo, I want it to be really meaningful. It’s just so weird when people tattoo cartoons over their bodies. It doesn’t look like it means anything at all.

I saw over facebook about this watercolor tattoo trend and it looks really pretty. I bet it’s painful though since it takes a lot of colors to make it look that nice.

I saw that and it really does look nice. Especially the ones that look like crawling flowers. So pretty!

I don’t like tattoos on my body because I’m scared of how it will look once I get old and wrinkly.

Hahaha OMG Cara has a bacon tattoo on her foot! She’s so adorable! I love her! ?

Lily Donaldson has a really thoughtful tattoo. I would definitely do something like that as well for my mom.

I prefer small tattoos or symbols that mean so much. I actually like the semicolon tattoo I’ve been seeing everywhere.

I want angel wings tattoo too! It looks so beautiful. 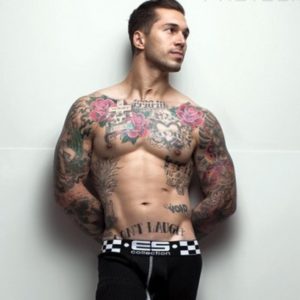 Can You Be a Model If You're Missing a Limb? YES! Meet Alex Minsky

This 28-year old retired Marine hottie turned Model, Alex Minsky is gonna keep your eyes onto this screen! Not just because...